Our Savior’s Lutheran Pastor Ken Schmidt reprised his role in dedicating the Memory Tree again this year for Winter Wonderland at the Chapman Park Campground. The event began as a way to bring cheer during Covid shutdowns is in its second year, with a brass band at the dedication. The crowd present extended outside the photo boundaries to the left.Photo by Joseph Back.
News
Winter Wonderland opens with Memory Tree dedication Saturday

Winter Wonderland started last year as a way to bring joy with physical distancing and covid shutdowns. Appearing before the City Council, the National Honor Society pitched their idea, and it was approved.

Starting December 11 this year with the dedication of a memory Tree by Pastor Ken Schmidt, it’s open once again for year number 2, now through January 2, from 4:30 p.m. to 10 p.m. at night. For those who showed up early enough last Friday though there was even a live band.

Composed of students from Stanley-Boyd High with Band Director Devon Wenndt on Baritone, the sound of Joy To The World, ’Tis the Season, and other classic numbers filled the air at the Chapman Park Campground Friday.

Later on in the Memory Tree dedication, Pastor Ken Schmidt of Our Savior’s Lutheran gave the dedication, speaking in part from John 1:1-5, and how the darkness had not overcome the Light.

Initial crowds for Winter Wonderland meanwhile seemed lighter than a year previous, but began to pick up as the night continued onward. Focusing this year on the back loop of the camp ground for its greater supply of electrical outlets, a sign reading “Happy Holidays” was displayed over the playground, while trees wrapped in lights glittered in the night.

Back towards the building area, hot cocoa and candy canes were served up by Emily Brenner, Carly Verbeten, Chef Santa (Mrs. Claus), and a well-traveled man in a red suit.

The opening of Winter Wonderland this year came on the heels of a blizzard (of sorts), which covered over the groundwork for the display and gave a finishing touch to the winter aspect of things.

But if winter’s not to your liking, that wasn’t the case of a pink flamingo, camped out (we sup pose) to get away from the Florida heat at campsite 4, or thereabouts.

No geese were visible, although ice fisher –

men had taken to the lake due south as an initial ice cover has solidified, though the fishing con test later in the season sponsored by the Stanley Sportman’s Club (see page 9) may just offer time for a firmer footing to develop, safety-wise.

Anyone know why flamingos stand on one foot?

Photo by Joseph Back. 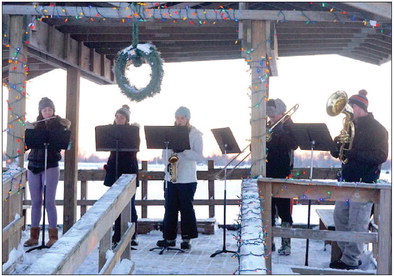 Members of the Stanley-Boyd Band offered music Friday as the Sun set, with many classic 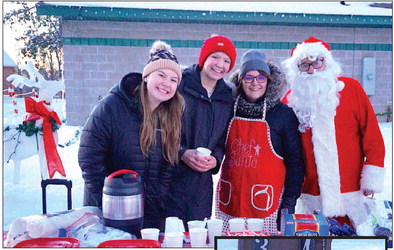 Hot Cocoa was on available Friday as served by (from left) Carly Verbeten, Emily Brenner, Chef Santa, and Santa. Meanwhile a snowbird from the Sunshine State (right) apparently came north to escape the tropical heat. Photo by Joseph Back. 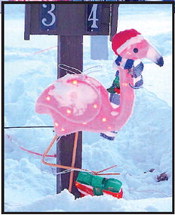