On Saturday, Dec. 11, both the Prescott and Ellsworth dance teams demonstrated their talent at the annual Prescott Invitational, which began on Saturday at 10 a.m. and concluded late in the afternoon with the awards ceremony.

Because Prescott dance was hosting the tournament, they didn’t officially compete in events. Instead, the dance team put on multiple performances which were called exhibitions and weren’t scored by the judges.

While Prescott was doing the behind-the-scenes work and making sure the tournament was running smoothly, Ellsworth was competing in the events. Ellsworth had four great results in the events in which the team competed. Head coach Amy Hill spoke about the event and their success.

“Our girls were super excited about the results from Saturday’s competition,” Hill said. “We were hoping to see some more of our competition, but the weather had other plans. All in all, it was a great day. We couldn’t have asked for a better outcome with the results.”

This year was the first time that Ellsworth has sent the full team to the Prescott Invitational. Typically, they will send small groups or duos to compete in some of the solo and ensemble events. This year, the whole team went, and they brought back multiple trophies for their efforts.

“We typically don’t participate as a team at the Prescott Invitational,” Hill said. “In the past, we have only brought some of our solos and ensembles, but this year it worked with our schedule and we are glad we made the trek through the snow for it.”

Coach Hill said that winning multiple events at the Prescott Invitational was a result of the hard work that the girls have been putting in since practice began nearly a month ago. The team has continued to grow and develop, which Hill is excited to see.

“The girls have been working super hard this last month,” Hill said. “We will continue to work on cleaning our routines and making those small changes. We just hope and ask for the girls to try for a better performance than our last and they definitely accomplished that on Saturday.”

In addition to Ellsworth’s winning performances and Prescott’s exhibition performances, the event also had help from the University of Minnesota- Duluth dance team, which not only helped with the tournament but also performed two routines at the end of the day for all of the teams and spectators to see.

Although some teams couldn’t make it to the event because of the snowstorm the previous day, there were still over a dozen teams at the tournament competing in events and performing routines.

The Ellsworth Panthers dance team celebrates with the trophies for first-place finishes in the Varsity Pom and Varsity Hip Hop events at the Prescott Invitational on Saturday, Dec. 11. Photo courtesy of Amy Hill

The Ellsworth Panthers dance team performs in the Varsity Hip Hop event at the Prescott Invitational on Saturday afternoon. Ellsworth earned a first-place finish for its performance. 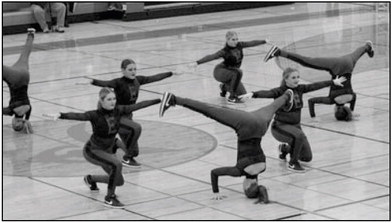 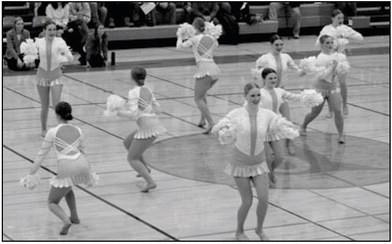