The 11 current wells of Cottage Grove are stationed at various places in the city, many near to and around the historical neighborhoods of Thompson Grove and Thompson Estates. Wellhead graphic provided by Emily Schmitz.
News
Up late with the Mississippi Dunes EAW

Down at the City website, meanwhile, the comment period is still ongoing now through December 29 for the Environmental Assessment Worksheet, or EAW. The EAW as such can be accessed by going to the City’s main webpage at www.cottagegrovemn. gov and clicking on the main link for the EAW, followed by another link to two to the document itself.

Contained within the report on page 18 is the news that “the Project Area (Mississippi Dunes) is not located in a wellhead protection area.” Such areas relate to land which is likely to contribute water over time to the wells that supply city water, as explained by city planner Emily Schmitz in an email regarding the EAW to this newspaper.

“The City has a Wellhead Protection Plan, which is required in Minnesota since November 1997 when MDH (the Minnesota Department of Health) implemented their well protection rules,” Schmitz wrote. “The purpose of the plan is to protect the City’s water supply wells by preventing contaminants from entering the area that contributes water to the well or well field over a period of time.”

Infiltration isn’t allowed in wellhead protection areas then (which Mississippi Dunes officially is not), because of the potential to contaminate the City’s water supply. Schmitz went on to state that the nearest city well to Mississippi Dunes is at 95th Street, while the groundwater at the Dunes doesn’t flow in the direction of Well No. 10, or others. So where does it flow exactly?

As before, reaching outside the EAW itself can provide additional clarifying information, specifically related to geological formations— which don’t recognize platted boundary lines. This time the place to look is the DNR groundwater atlas for 2019, accessible on the agency website at: https:// files. dnr. state. mn.us/waters/groundwater_ section/mapping/cga/ c39_washington/washington_ report.pdf From different county aquifers and their extent to the potentiometric surface contour (water pressure curve) for underground water resources, the DNR groundwater atlas for Washington County is a wealth of information to science nerds. With the water pressure curve/ potentiometric surface contour proceeding from higher elevation (high pressure) to lower elevation (less pressure), the flow at Mississippi Dunes and the surrounding area is towards the river, in general terms.

In addition, however, much of South Washington County is highly prone to the entrance of pollution from above. What hits the ground then, trickles down—provided it can get inside. Which brings us back to the well protection question and its larger purpose. Although Mississippi Dunes isn’t located in a wellhead protection area, its high pollution sensitivity is shared by sites further north that are in the wellhead protection zone. Protecting city water, doesn’t stop at the riverbank. But lest you think that’s all to share, there’s more in the EAW report.

“The Project Area is bound by the Mississippi River on the southern boundary which is designated as a Minnesota Wild and Scenic River,” the EAW states. With a series of different and connected tributaries, streams, wetlands, and other surface water features, some “are identified on the MPCA (Minnesota Pollution Control Agency) 303d Impaired Water List, but Moer’s Lake, Grey Cloud Channel and Grey Cloud Slough are not listed on the Imparied List.” This is important as the waterways in question “are the waterbodies within 1-mile of the Project Area.” With 8.2 acres of wetlands on the Project site, the water from these drains into Grey Cloud Channel, and from there to Grey Cloud Slough and Mooer’s Lake. Meanwhile, a change in MRCCA (Minnesota River Critical Corridor Area) ordinance by the City of Cottage Grove as driven by the Minnesota DNR, which was assigned the task in the Minnesota Legislature several years back, could impact the development at Mississippi Dunes, as stated in the EAW.

“The City of Cottage Grove is in the process of updating its MRCA ordinance and the Project will be subject to the ordinance at time of land use application and permitting,” the EAW states, while a planning staff report referenced in an article by Sadie Jones lists some of the changes to come, copied below:

• Decks and patios may penetrate 15 percent into the required setback as long as the structure is not in the bluff impact zone.

• Averaging of setbacks for principal structure.

• All legally established non-conforming and principal structures may be expanded laterally, as long as the structure is not in the bluff impact zone.

• Vegetation removal permit and restoration plans are required for the intense removal the trees for shrubs in a contiguous patch, strip, row, or block.”

But while the city has worked to set aside the riverbank for an undisturbed space, the most pertinent outcome from the EAW for groundwater, comes form the water resources report from the EAW, regarding nearby PFAS.

“The Project Area is not located int a wellhead protection area,” the EAW states. “Based on MDH records, there are two existing (private) Wells within the Project Area, and the Phase I EASA conducted by they Project Proposers indicated there may be four well, three of which have potable water supply. There is an irrigation well located on the golf course which was used for maintenance and management of the greens and fairways, and a well that was used for clubhouse operations,” the report states. And while three of four wells with potable drinking water in the Project Area isn’t ideal, the steps are nevertheless being taken nearby to bring nearby properties into the city loop of good water— which seeks its own level as opposed to following arbitrary human commands.

“As previously referenced, the MPCA and MnDNR prepared the Conceptual Drinking Water Supply Plan for communities in the east metro affected by the contaminates. Cottage Grove’s groundwater was affected by the 3M PFAS contamination, and therefore has been actively participating in the 3M Settlement Working Group. An outcome of that Working Group is the objective to hook residential users up to the municipal water supply, including existing rural residential properties with private wells abutting Grey Cloud Trail South.”

Drinkable water then, is on the way, courtesy of the City and its protected wellheads. 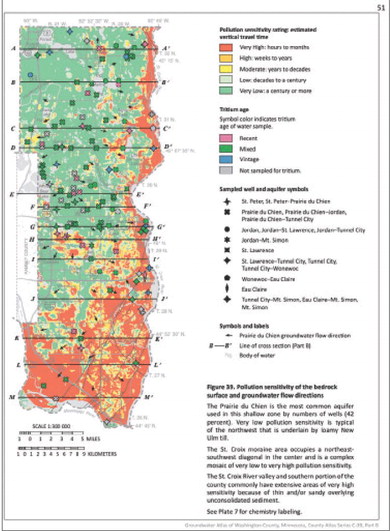