teasing jokes and willingness to lend a hand at any hour of the day. His greatest accomplishment was raising a family with his bride of 51 years Denise (Carlson) Bechel. Together they raised their four children in Idaho, Arizona, England, Philippines, North Dakota, and Wisconsin, where they built lifelong memories together. The two eldest sons, Dwight and Dwayne continued his legacy, both of them retiring from the Air Force after 20 years of service. His grandson, Andrew carries the Air Force torch as he is currently serving. Richard was proceeded in death by his father Edward Bechel. Richard is survived by his mother Zeona Bechel, brothers Rodney (Jeanie), Brian, sisters Karen (Mark), and Betty, numerous nieces and nephews. He leaves behind a missing space in the hearts of his children Dwight (Cindy Oliver, kids Andrew and Rebekah), Dwayne (Lynsey Deardurff, kids Jamie, Devyn, Zaedyn, Lyzabella, Ariyanna, great-granchildren (Ari and Violet), Darryl (Dottie Ells, kids Dawson and Dominic), his little girl Danielle Drapeau (Ryan, kids Bradlee, Brycen, Brayden, and Braelynn). They will all miss hearing his witty and sarcastic remarks. There will be a celebration of life on December 18th at 11:00 a.m. Real Life Ministry, Post Falls, ID. Reception to follow right after with a Pot Luck.

RET USAF MSgt Richard Lee Bechel, 72, of Post Falls, Idaho was called home to Jesus on September 30, 2021. He passed away after a 10 month battle with Acute Myeloid Leukemia. Richard graduated High School out of Ellsworth, WI. After enlisting in the Air Force and traveling the world, he remained a loyal fan of the Green Bay Packers and Ketchup until the end. Richard served 21 years and 9 months in the U.S. Air Force. He was a faithful member of Real Life Ministries, in Post Falls, Idaho, and served many years in the benevolence ministry, also as a home group leader. His compassion for others and willingness to help blessed those he served and those he served with. For many years, he refereed High School football, and basketball games, Umpired Baseball games, and was involved with his children and grandchildren’s sports activities. His dedication to High School sports led him to being inducted to the Idaho High School Hall of Fame. After retiring, Richard was able to hit the golf course more often and enjoyed playing rounds with some of his closest friends. He will be remembered for his 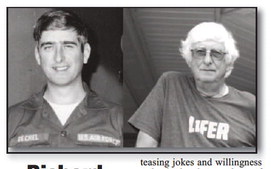