The River Falls High School boys hockey team is off to a 2-0 start to the 2021-22 season after winning back-to-back games at the Amery Warriors Hockey Thanksgiving Tourney, which was held at the Amery Ice Arena on Friday, Nov. 26, and Saturday, Nov. 27.

The Wildcats defeated the Ashland Oredockers 9-2 on Friday afternoon and the Rhinelander Hodags 7-6 on Saturday afternoon to win the Thanksgiving Tourney in Amery.

The Friday game began with a couple of early first-period scores by the Wildcats. Less than two minutes into the action, River Falls junior forward Matthew Marsollek scored a rebound goal to give the Wildcats a 1-0 lead early in the first period. Approximately one minute later, junior River Falls defensemen Hunter Rappel scored an unassisted goal from nearly the blue line. The slapshot goal gave River Falls a quick 2-0 lead against Ashland.

With four minutes to go in the first period, Oredocker Braxton Zaleski scored on a tap-in goal after a beautiful pass from junior forward Ethan Petersen. The goal made the score 2-1, still in favor of River Falls.

The Wildcats had a great scoring opportunity taken away when River Falls sophomore Thomas Tober had a one-on-one breakaway on the Oredockers goaltender. Tober’s wrist shot was snatched out of the air by sophomore Ashland goaltender Connor Paakola, who made a fantastic glove save to keep the score 2-1.

Less than two minutes after that, Ashland sophomore Gavyn Moncher scored a goal to tie the game 2-2 with 10 minutes remaining in the second period. After approximately five minutes of no scoring, River Falls junior Wyatt Bell broke loose and buried a slapshot from nearly the blue line. The long-distance goal gave River Falls a 3-2 advantage which they took into the third period.

The first two periods of action were fairly balanced. That all changed in the third period. The River Falls offense exploded, scoring six goals in the final period to win 9-2 in blowout fashion after playing the first 34 minutes nearly even with Ashland. In the third period, River Falls had goals come from junior forward Teddy Norman, who had two, two goals from Bell, one from junior Chase McQuade, and one more from Marsollek. After the game, head coach Cam Wilken spoke about the victory and that explosive third period.

“It was when we decided that we need to focus on what we’ve been practicing in our system and our units, and it was our first game of the season,” Wilken said. “It takes a while. Our leaders in the locker room kind of stepped up and decided that’s what needed to be done.”

The most influential player on the ice the entire day was River Falls junior Wyatt Bell. He had a five-point hat trick in the first game of the year and was phenomenal in all aspects of the game. Wilken spoke about his performance.

“There is a reason he’s the captain on the team, let’s just put it that way,” Wilken said. “He is a tremendous football player, but he’s just a good human. I couldn’t be happier today. He showed everyone what he could do today.”

After struggling in the preseason scrimmage the week before, River Falls came out and scored two goals in the opening five minutes of the first period. Wilken spoke about how those early goals got the team going.

“We didn’t have a good scrimmage last Tuesday in our preseason game,” Wilken said. “It was a whole different vibe on the bench as soon as we put the puck in the net. It was a little bit like, ‘OK. We’re not a bad hockey team. Let’s start doing what is expected.’” Wilken spoke highly of his team in the first game of the season, especially as they introduced a new playbook and system this offseason. To score nine goals in the opening game of the year in a new system is nothing short of incredible for River Falls.

After winning the Friday afternoon game, River Falls played on Saturday afternoon against Rhinelander, a game that the Wildcats won 7-6 to begin the season 2-0.

The game against Rhinelander was a thrilling one-goal victory in overtime. Similar to the game against Ashland, the River Falls offense was clicking once again. The Wildcats scored 16 goals total in the first two games of the season. However, the defense struggled on Saturday afternoon, primarily due to penalties that put too many River Falls players in the box.

“(Wyatt) Bell played great again, no surprise there, he’s our leader,” Wilken said. “Jimmy Rock and Andrew Amundson both scored their first career goal. Their line of all sophomores with Wyatt Hoepl at center was great for us all game. Rock had his first goal be the overtime winner. I’m sure he’ll remember that one for a long time.”

Now that River Falls has improved to 2-0, Wilken was able to reflect on the opening games of the season, including two victories in a new system for the players on a team that only has three seniors and is young by almost any standard.

“Being 2-0 feels great,” Wilken said. “We had a really good week of practice going in. So, we knew the expectation was to come out with two wins. But you never know until you actually play the games. The group who is returning from last year only won one game the entire season and the rest of the roster is super young. We have to learn how to win before we end up knocking out Big River Conference teams left and right. This was definitely a huge step for our program and our group going forward. We’ve got a lot of confidence going into two really tough BRC games next week.”

The next game for River Falls was on Tuesday, Nov. 30, when the Wildcats traveled to Eau Claire Memorial for a 7 p.m. game in which River Falls hoped to advance to 3-0 for the season.

River Falls boys hockey head coach Cam Wilken stands behind the players on his bench as they watch the action between the Ashland and River Falls starters. Photo by Reagan Hoverman

River Falls junior forward Chase McQuade (#16) and Ashland junior forward Braxton Zaleski wait for the official to drop the puck for a face-off during the game on Friday, Nov. 26, at the Amery Ice Arena. Photo by Reagan Hoverman

River Falls junior forward Teddy Norman makes a pass to a teammate during the Wildcats’ tournament game against Ashland on Friday afternoon. Photo by Reagan Hoverman 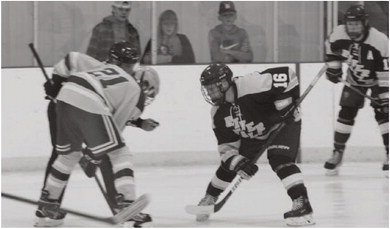 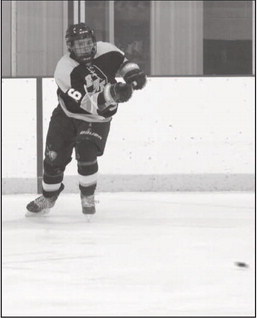